Since 1991 Crystal Distortion has been at the forefront of live musical experimentation. With seminal releases under a variety of aliases, he was signed to Rising High records in his teens. As a member of Earth Leakage Trip, he made the first Moving Shadow record: Psychotronic EP (cat# SHADOW 1) on which is the all time classic: No Idea.

On joining the Spiral Tribe Sound System, he played a key role in defining its musical direction. Pushing the envelopes of production and performance alike, he rapidly became one of the most acclaimed live acts in Europe. He has put a highly individual stamp on almost every electronic style of the last twenty years, and his extraordinary ability to bend technology into new spheres has made him an iconic figure.

With over 80 single releases, 4 albums, numerous sample packs and custom sound design projects behind him, Crystal Distortion is perhaps best known for his improvised live sets. Systematically sidestepping categorisation with flashes of controlled chaos and alchemical spins on stylistic orthodoxy, his sets balance pulsating energy with the surreal.

Today, Crystal Distortion’s liveset is a unique experience. His trademark moments of mayhem and infectious grooves propel dancefloors past the frontiers of regimented normality to explore the sonic spaces beyond.

As a teenager, experiencing the illegal acid house parties of the late 80s, 69db was inspired to become a dance music producer. Being certain of his direction, he busked the London Tube, Paris Metro and Berlin U-Bahn to finance his early experiments in electronic music and exchanged his drum kit for a Roland 303 and an EDP Wasp synthesiser.

A member of the Spiral Tribe Sound System from 1991 onwards, and co-founder of the original SP23 studio, 69db helped push a nascent dance music scene beyond the limits of track production and DJing and into the unexplored territory of live improvised music.

Embracing traditions as diverse as freeform jazz, dub, house, funk, hard tek and raw tribal rhythms, 69db has consistently set new standards of live performance. Switching up into style after style and collaboration after collaboration, the one constant throughout has been his belief in the transformational energy of music.

A live musician through and through, he has released tracks under Spiral Tribe, SP23, R-ZAC and Liveset Dub on labels such as Big Life, Drop Bass Network, Force inc, Rabbit City, Labworks, Acid Orange, Expressillon and Trax Records Chicago. Today, his live performances weave threads of spirituality and raw urban grit together into fluid moments of musical experience.

Before meeting Spiral Tribe in 1991, Ixindamix lived on the road with a horse and cart and moved across the British countryside with the horse-drawn travellers. Whenever she found a good site for a party she’d give the Spirals a call and the sound system would be magically spirited in.

Ixindamix began her musical career in 1992 after leaving the horse-drawn and joining the Spiral’s convoy of matt black trucks. Collecting records with an irrepressible energy, she quickly became one of the sound system’s central performers. With her DJ sets filling floors week after week, she began honing her synthesiser skills in the sound system’s mobile studio. The resulting livesets rapidly became popular in countries all over Europe, and she became well known for her tantalising analogue improvisation and twinkling frequency mischief.

Co-founding the Audiotrix record label in 2000, she has steered it to a position of respect and helped break a stream of new artists on the label. Adding an online digital and vinyl shop to Audiotrix in the last two years, she is a pivotal figure in the European scene.

Today, Ixindamix plays at international events every weekend while  working in the studio through the week. Injecting charisma and sparkling personality into every set, her ability to whip a dancefloor into sheer euphoria has made her highly sought after across the continent.

Jeff 23 cut his teeth at some of the gangster-run London inner city warehouse parties. He began to DJ in 1991 and played regularly at many club events , underground parties and pirate radio in the UK. Tired of having to deal with violent criminal promoters, he joined Spiral Tribe and helped spearhead the move into continental Europe in 1992-93 .
Jeff was instrumental in forging a harder edged Techno sound which influenced the scene throughout the 90s with the release of over 50 vinyls and many cassettes as well as countless timeless performances . He is more known though for his talents as a DJ rather than a producer or live set !
He was heavily involved in the organisation of the first large scale underground parties , Free parties and Teknival’s on the European mainland .
As well as being a key member of the SP23 collective he continues to organise mixed subculture events and innovate his musical style in Berlin alongside close friends and family under the name Freaky 23.
Jeff’s current sound is guided by hypnotic #techno and underground #house in their purest forms and he one of the pioneers of the new warehouse techno style . His instinctive ability to take dance floors on profound journeys have made him a leading figure in European techno .
His passion for musical depth and innovation has proved a potent musical force this coupled with an instinct to adapt to almost any situation while pushing the barriers of the unknown ( Something that is not found in many Dj’s in this day and age. ) He is a safe bet for underground party or cutting edge club pushing the envelope worldwide from week to week !

Meltdown Mickey began DJing in 1989 at some of the early UK warehouse parties. As an original member of the Spiral Tribe sound system, he became well known for his distinctive morning sets. Often seeing in the dawn, he smoothed the harder sounds of the night out into the warm, rolling grooves of sunrise. He was also a key player in pushing boundaries ever further and was at the head of the convoy of tank transporters hauling decommissioned Mig fighter jets out of Berlin to make the first inroads into the Czech Republic

He has played at a variety of major events and festivals over the last twenty years including Nordik Impakt and Glastonbury. In 2000 he co-founded Audiotrix, and his influence in sourcing talent and developing artists has been essential to the label’s success. Running much of the label’s logistics, he helped launch its record shop arm in 2011.

Meltdown Mickey’s deep, funky sound has gained him international recognition over the past 20 years. Today, he brings a depth of soul to the mix that is both fresh and eternal.

Simone met Spiral Tribe at their first ever party – after a police raid the generator had been confiscated. At 2am in the morning she got on the phone to organise a back-up. The party continued, and so it was that she became one of the core-organisers and creators of the fledgling sound system. Playing a central part in its early evolution, she also became one of the sound systems principal MC’s. In 1992, she wrote and performed the vocals on two of the sound system’s best known releases, Breach the Peace and Forward the Revolution.

In 2006, she joined forces with Ixindamix to form the Bad Girlz. Gaining popularity for their irreverent style and cheeky lyrics, they have gone on to play extensively across Europe and the UK. The Bad Girlz have also released five singles and an album on the Audiotrix label. Sim Simmer was also responsible for the administration side of many of the sound system’s spin off projects.

Sim Simmer performs regularly as the Bad Girlz vocalist, and MC’s at the full-crew SP23 events. Her vocal passion and on-stage charisma bring an added level of energy to every live performance.

Feenix 13 was one of the founder members of Spiral Tribe. She was a lynchpin of the sound system’s event organisation and played a vital role in the design and décor. Responsible for many of the later flyers and heavily involved in the conception of the event spaces, she helped define the ‘look’ of the sound system. When the Spirals travelled to Europe it was Feenix 13 who coined the word ‘Teknival’. A word which would become synonymous with the new underground movement.

At the end of the 1990’s, she fulfilled a similar role in the Sound Conspiracy sound system and embraced video as a design tool. Since 2000 she has been the resident designer for the Audiotrix record label and has more recently been specializing in computer based digital imagery and animation, which she incorporates into her live VJ mixes.

Today, Feenix 13 is SP23’s VJ and central to the graphic design team. Her digital remixes of archetypal imagery and mutation of symbolic themes has given SP23 its own, mysterious, visual atmosphere.

Born in Berlin on the road with Spiral Tribe, Max Volume attended his first rave at 2 weeks old. Immersed within dance music culture from his first breath, he rapidly honed his musical instincts as a teenager and developed a natural flair for performance and production alike.

As his musical identity began to flourish, Max spent 2 years working at Noise Control Audio where he gained an in-depth knowledge of how sound systems work and the physics of sound – concepts which he wove deep into his music.

Playing across Europe with the Audiotrix crew, he swiftly made a name for himself with his energy, technical skill, showmanship and infectious groove, and with a trail of packed dancefloors in his wake, he began to play regularly at SP23 events.

He divides his time equally between playing to packed houses across the continent and submerging himself in his studio working on his forthcoming releases. 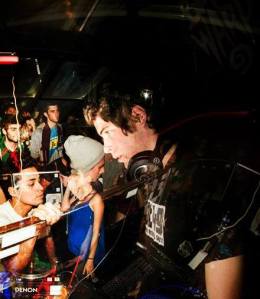 Charlie Kane made an instant mark on the musical landscape when in 2011 and at the age of 16, he began unleashing a series of slamming releases that garnered him respect, recognition, and the interest of a wide spectrum of labels. He has released singles on the likes of LOT49, AUX Technology, VIM, Audiotrix, Elektroshok, Diablo Loco, 96kHz, Divergence, Scarcity, Death Proof, Neom and many more.

He was born into the heart of the Spiral Tribe sound system where he developed not only a passion for production, waveforms and frequency, but an intuitive understanding of live performance.

Hugely prolific and consistently switching up styles and vibes, he has become widely known for deeply penetrating tracks in styles as diverse as low slung house and rampaging drum n bass. Carving an especially incisive niche within the breaks scene, he swiftly became a regular in the Beatport charts.

He is currently working on his first full length album and is scheduled to play such events as the iconic Transmusicales in Rennes as well as at selected SP23 events.

After a five minute career as a cleaner at the Gillette shaving foam factory in Reading, Mark Angelo Harrison (aka Stray Wayward) put down his bucket and mop and picked up a pen and a bottle of black ink.

He jumped on a train to London and fell in with a nocturnal crowd of DJs, musicians and artists. Wherever he went he carried his pen and would often be seen scribbling ideas and sketching designs into one of his tattered notebooks. Momentarily (after finding a job at a printers on Ladbroke Grove) his life stabilised into a flat-lined nine to five. He was doing well, having just accepted a promotion from tea-boy to photocopy operator. But life was about to deal him an unexpected wild card.

One night, while alone and working late, he became curious about a new industrial laser copier that had recently been installed in the printwork’s basement. Unaware that he was only the thickness of a printed image away from a total dimensional shift, he began to experiment with its zoom capabilities. While digitally exploring the image of an ammonite, he became sucked into its logarithmic spiral – to him, a symbol of life, evolution and chaos. The next day he didn’t return to work, choosing instead to throw himself into a new project – something he called: Spiral Tribe.

Today, Mark is a writer, photographer and artist.